Foylemore Oysters is located on the North coast of Ireland at the border between Co Derry and Co Donegal, about 10 miles east of the City of Derry.

The oyster farm has two sites:

The first upstream site is located at Culmore Point; sheltered by the upper estuary it is more suitable for growing the seed.

The second site, facing the waves and weather coming in from the east, is situated towards Greencastle.

See the map below.

The river Foyle is a river situated in West Ulster flowing from the confluence of the rivers Finn and Mourne.  It passes through the City of Derry to its discharge in Lough Foyle.

The River Foyle, for its size, and taking into account its tributaries, is the fastest flowing river in Europe.  The river banks and channels are unique for their wilderness with a natural fauna and floral richness.

The overall good water quality and natural productivity of the river Foyle support the largest population of Atlantic salmon in Northern Ireland.  Its an obvious choice for producing high quality oysters.

Oysters are sorted at the plant 1 - 2 weeks prior to shipment and sent for hardening on the higher shore. Grading and quality checks on the conveyor belt are done just before the final wash and bagging into 25Kg mesh bags.

Oysters are hand graded the day before transport for large orders (4 - 5 pallets) or the day of departure for a single pallet. The plant is now equipped with cold storage so that the oysters can be stored at an optimum temperature (5oC) before the lorry arrives to pick them up and take them to their destination. 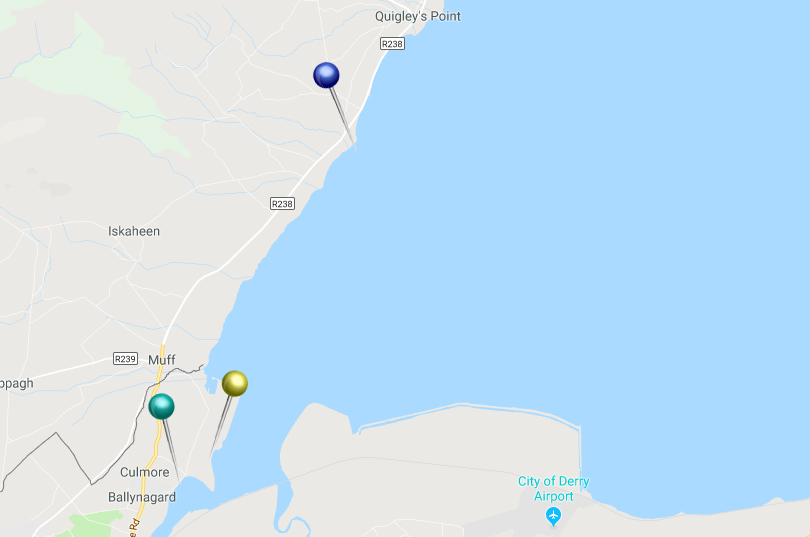 The first upstream site is located at Culmore Point.  The shelter of the upper estuary is more suited to growing the seed on.

The second site, facing the waves and weather coming in from the east, is situated towards Greencastle, approximately 5 minutes drive from Culmore Point. This site has less river influence but is more favourable for finishing the oyster to a marketable size. The oyster bed is hard, sandy and easy to access throughout the year with a tractor and trailer.